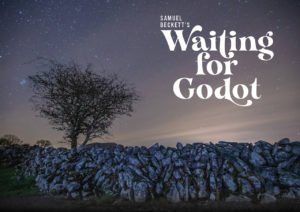 Two tramps on a lonely
Irish road await the
appearance of a
mysterious character
called… Godot.Whilst
they wait they while
away the time
byquarrelling, making
up, contemplating
suicide, trying to sleep,
eating a carrot and
gnawing on some
chicken bones.

For his hilarious,
poignant and
unforgettable play,
Beckett created one of
the great comedic
double acts in modern
theatre. Once famously
described as ‘a play in
which nothing happens,
twice’, Theatre Nation
bring their customary
wit, humour and flair
for highly expressive
physical theatre to
Beckett’s masterpiece.

Our touring production of Samuel Beckett’s Waiting for Godot is   coming in
Spring 2020!