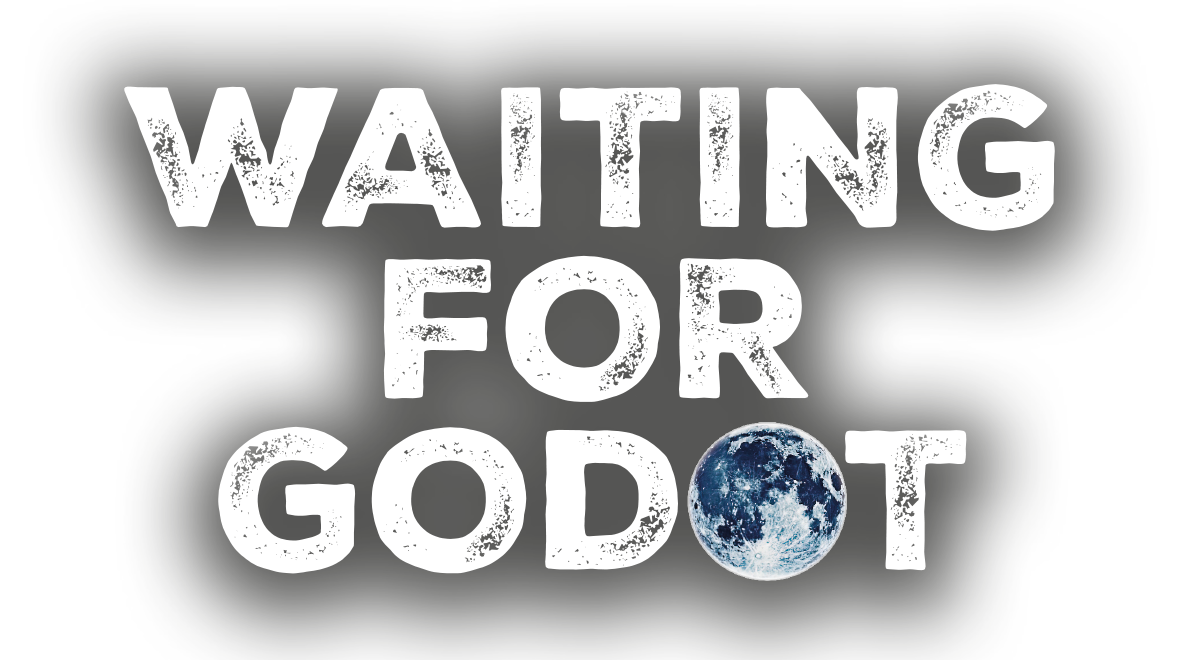 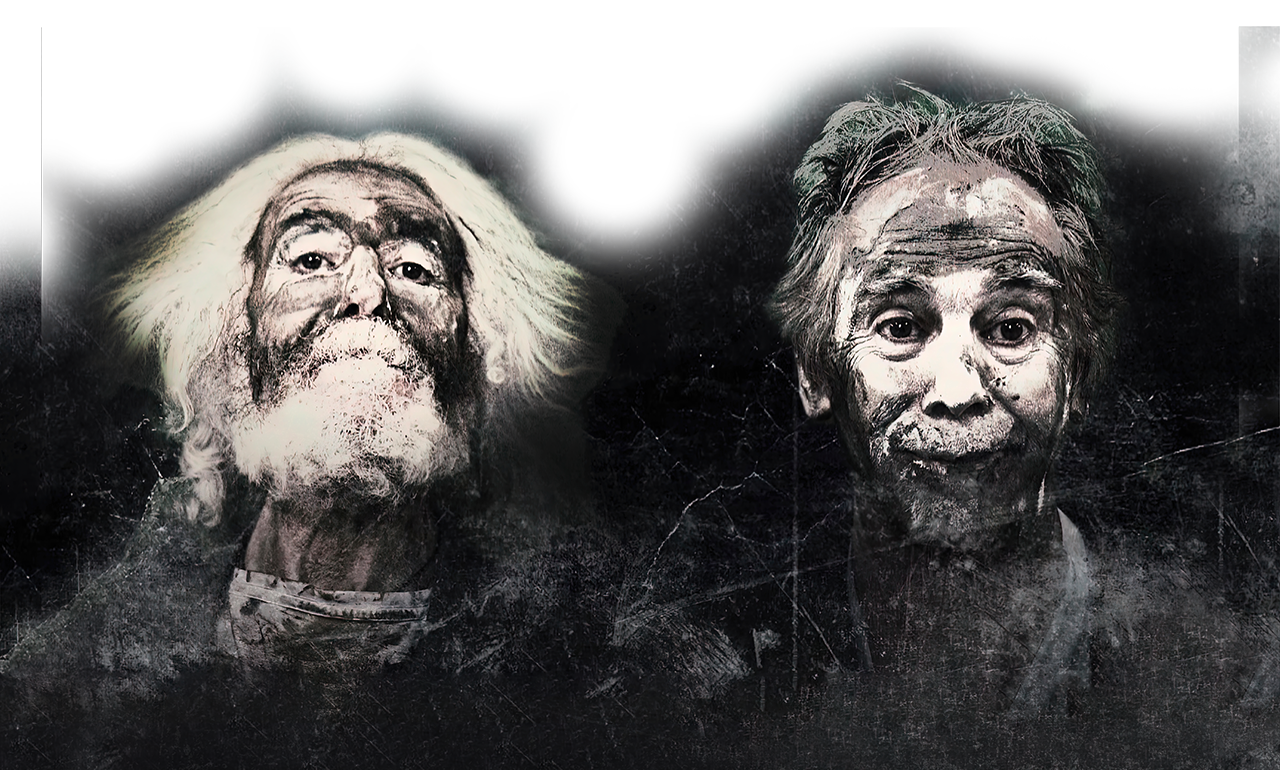 The following article has been taken from the Hastings Independent.

Beckett’s enigmatic characters, Vladimir and Estragon, have been waiting for almost 70 years for their titular protagonist to appear.  To celebrate a landmark Hastings production of the play we offer a trio of reviews and some background.

Waiting for Godot, from being the scandalous and outrageous debut to Samuel Beckett’s prodigious theatre life, has become a canon of theatre literature. Is it even relevant to ask who is Godot and why are they waiting for him? The play was a ground-breaking moment in cultural time. The problem now is that the very title is freighted with worthiness. Furthermore, the production of any Beckett play is heavily protected by the family – directors have to forswear virtually any deviation from the set, stage and script. If the author placed a dead tree on stage, then dead tree there will be. Not unreasonable perhaps, but it can have a stultifying effect on directors and actors.

In Hastings’ tiny Stables theatre, world famous director David Glass invoked the world of music-hall, vaudeville, clowning and slap-stick and shook the text and action out of A-level mummification and into direct life. All five characters: Pozzo, Vladimir, Estragon, Lucky and Boy, used highly stylised clowning and movement vocabulary in great detail and to strong effect. Lighting was used non-naturalistically to shift focus and to shock. The floorcloth was particularly effective in giving us faintly outlined shapes of bodies that could read as crime scene outlines or as cave paintings, making the ambition of the production clear from the outset. This was a grass-roots, direct to the audience, emotionally engaging, far removed from a reverential West End, production.

Theatre Nation burst back onto the boards with Waiting for Godot. A long time in the planning, paused by the pandemic, the performance took a great gasp and heaved itself up from the ashes. Brim-full with bitterness, loneliness, lightness, madness and a dollop of grotesque, my response feels a little muppet show: I loved it! It was a triumph! I hated it! It was too painful! It’s impossible to extract the show from the players, or the players from the show. The clowning and physical performance were top-notch. The text itself: timeless, repetitive, challenging, annoying, heart rending, but most of all, real.

Remember those Goyas the Chapman Brothers scribbled over with clown faces? They’ve come to life: shouting, muttering, staggering, stuttering, sweating, wrestling, following one another endlessly, showering themselves in mud. Dressed in tatters, with Irish accents.

Oh. My. God. So funny. A scene would be played, then all players freeze-frame, Vaudeville style. The physicality of the performance was incredible, and the slapstick was excellently executed. Like watching a sad, merry dance, on repeat.

I loved how the off-scene characters were always at the edges, looking in, reacting to the action. Watching felt claustrophobic, voyeuristic, incredibly joyful: like being in the belly of a huge mud-monster, breathing dry earth in and out, and laughing at its own futility, fragility – the ridiculousness of it all.

When will this end? Are we here forever? Poor lads, having to play this night after night. Heavily, huffingly homoerotic. So many stretches, shuddering breaths, thrusts and waggles. Such … a lot of … innuendo. Laid on like a thick slab of salted butter on soda bread.

Lucky’s silken slip, his sub-missive nature … what are they saying (or not saying) about women? Whip-wielding Pozzo… amusing and irritating in equal measure.

It brought echoes of the deep sadness of lockdown to me. I didn’t ever want to taste that again. But I didn’t want to leave either. I wanted to see how it would all unfold.  Did I enjoy it? I endured it. And I’m glad I did.  Art isn’t meant to be ‘nice’

Glyn Carter sees a Sandbox of Isolation and Pain

Beckett told the world not to look for the subtext of Waiting For Godot; sound advice to actors, directors and audiences. Just accept. Take it as it comes, because to analyse idiocy is a task for fools. Theatre Nation’s production is something of a coup to have eminently fitting talents of the internationally renowned David Glass as director.

Beckett delivers random happenings to Vladimir and Estragon, and takes them precisely nowhere as they wait in hope and resignation for Godot. Glass adds a layer of unpredictability like sprinkled hundreds and thousands, through the techniques of physical theatre and commedia dell’arte. Characters endlessly swap hats like clowns, Pozzo changes his accent from English brigadier to Yank, Scot and Irish – lazzi jokes and diversions built into performances that have little bearing on the story.

Not that Godot has a story. The play hangs on the energy between Vladimir and Estragon, who lie on a continuum between Laurel and Hardy, Keaton, and Chaplin, and Spike Milligan and Monty Python. Billy Clarke and Patrick Kealey bring out the pair’s pathos, their fear of being alone, their co-dependence and their childishness.

Henry Maynard, as the bombastic monster Pozzo, commands the stage like a Shakespeare tragedian, yet he is a hollow vessel, as purposeless as the two tramps.

Francois Terstory is extra-ordinary as the unfortunate Lucky, Pozzo’s slave. Experience working with the legendary Lindsay Kemp gave Terstory’s movement and dance, and his crystal waterfall stream of consciousness monologue, almost angelic transcendence … before he is noosed once more.

Jack Norris’s Boy brings messages from Godot with the energy of a cocaine-fuelled clockwork canary, utters random beeps, and feeds prompts from the wings whether the actors need them or no.

Staging is minimal, as Beckett directed. Lighting effects show night and day, but also mood and tone, and if we don’t know blue signifies evening or chagrin.

Despite Beckett’s instruction we do look for meaning because we humans are wired that way. Beckett knew this, and knew exactly what he was doing with Vladimir’s perplexity about the gospels’ veracity. God-oh, if he exists, is coming tomorrow, but tomorrow never comes. Life and the universe itself have no purpose. Our post-pandemic nihilistic culture must grapple with the same questions Beckett did after the Second World War.

Theatre Nation’s production makes no attempt to make sense of the senseless. What it does so brilliantly is to delve for the humour, fraternity, and consolations that do – yes they do – hide in our universal sandbox of isolation and pain.